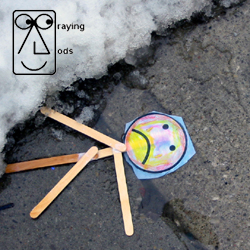 PRAYING GODS, Bankruptcy's original sonic free-for-all, is now free for all to download. "Ballistic Missal 2000-2007" picks up right where "Ballistic Missal 1997-2000" left off, when the more rhythmic/musical elements of PG began to be channeled into new and separate projects, while the Gods themselves start truly developing the sound they would become best known for: utterly stupid shit. From there we travel on to 2003, essentially the final days of Praying Gods' continuous recording efforts, after which PG went into a period of deep hibernation, reemerging only briefly in 2005 and 2007 for a few limited recording engagements. So ends the first decade of Praying Gods; an era gone but, (un)fortunately, not forgotten. In the words of legendary noise fan Joe Lombardo: "Praying Gods continue to bafal [sic] and entertain me" - and so long as these audio files are kicking around space (be it cyber, outer, or otherwise) they will hopefully continue to do the same for anyone else willing to listen.